On May 22, 2011, a massive EF5 tornado sliced through the heart of Joplin, Missouri leaving behind a scar six miles long and almost a mile wide.  The most recently released statistics state that at least 139 people lost their life, 40 are still unaccounted for, and 1,000+ have suffered injuries.  The estimated cost of damages goes into the billions of dollars, but that figure pales in comparison to the emotional price this community has paid.

My purpose for going to Joplin was to assist in a project assessment for All Hands Volunteers, a non-profit disaster relief organization I have worked with several times before.  I definitely recommend you check out their website, www.hands.org, for more information about the wonderful work they do here in the US and internationally.  I met up with Operations Director Bill Driscoll, Jr. Thursday morning, and we spent most of the day touring the affected areas with a couple of FEMA VAL’s (voluntary agency liaisons).

It’s incredibly difficult to find the words to describe what I saw.  The devastation is just so overwhelming – so I’ll let my photos below tell the story…  One of my tasks while there was to document the damage with photography, but I quickly discovered that despite my best efforts, there simply isn’t any one photo I could ever take that would do this disaster justice.  The magnitude is just so enormous.  My only hope is that at least one of these images moves you to take action in the recovery efforts if you haven’t done so already.  Joplin needs help, and YOU can make a difference in someone’s life there. 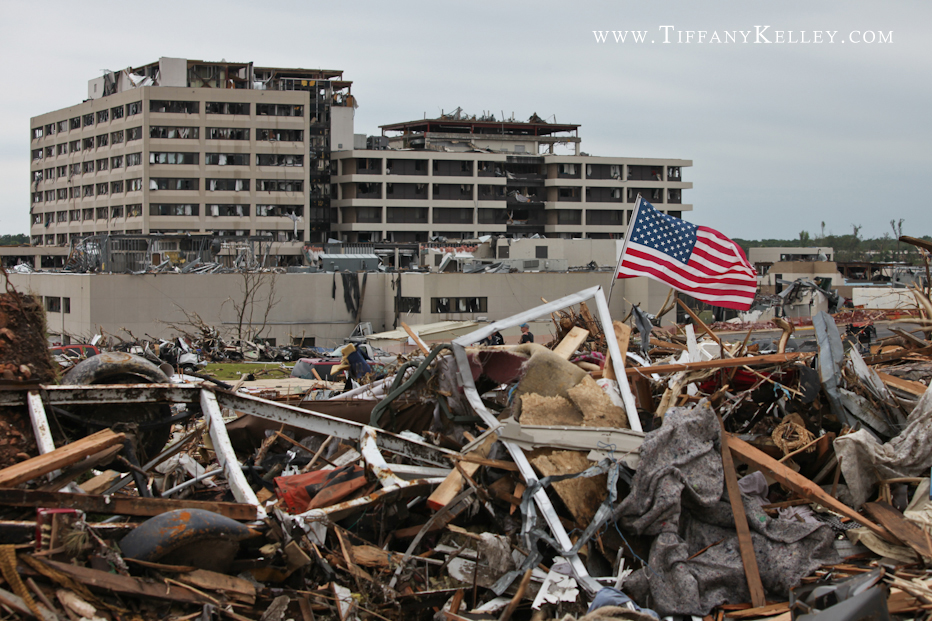 ABOVE: St. John’s Hospital was in the direct path of the tornado.  BELOW: The surrounding area was flatten as far as you can see.

BELOW: A little girl’s bedroom closet is one of the only rooms still standing at this home. 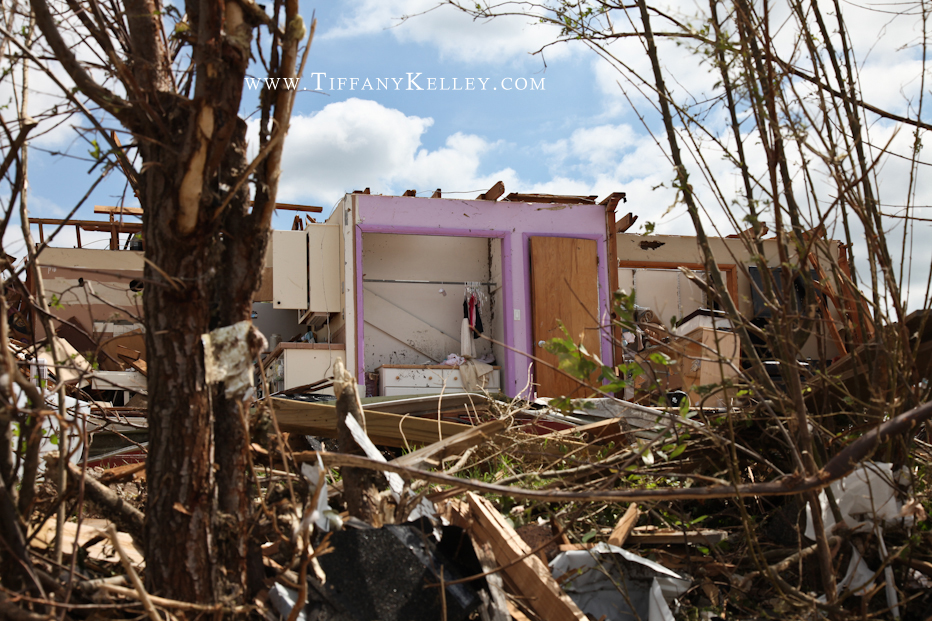 A little dress and some other articles of clothing still remain on hangers.

BELOW: Firemen work to uncover one of their trucks badly damaged in the storm. 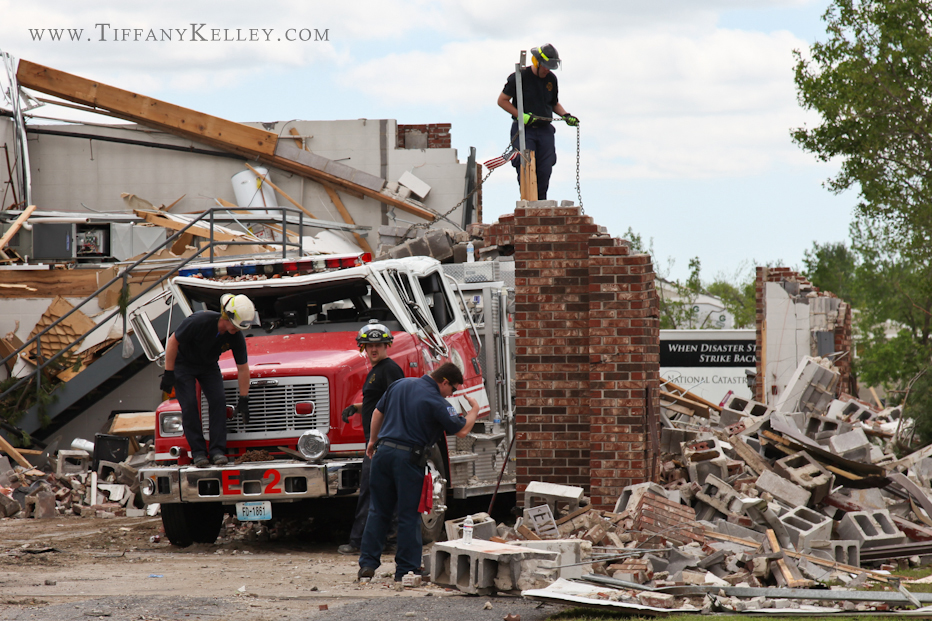 BELOW: Many people have found hope in this scene below. The cross still stands strong at St. Mary’s Catholic Church. 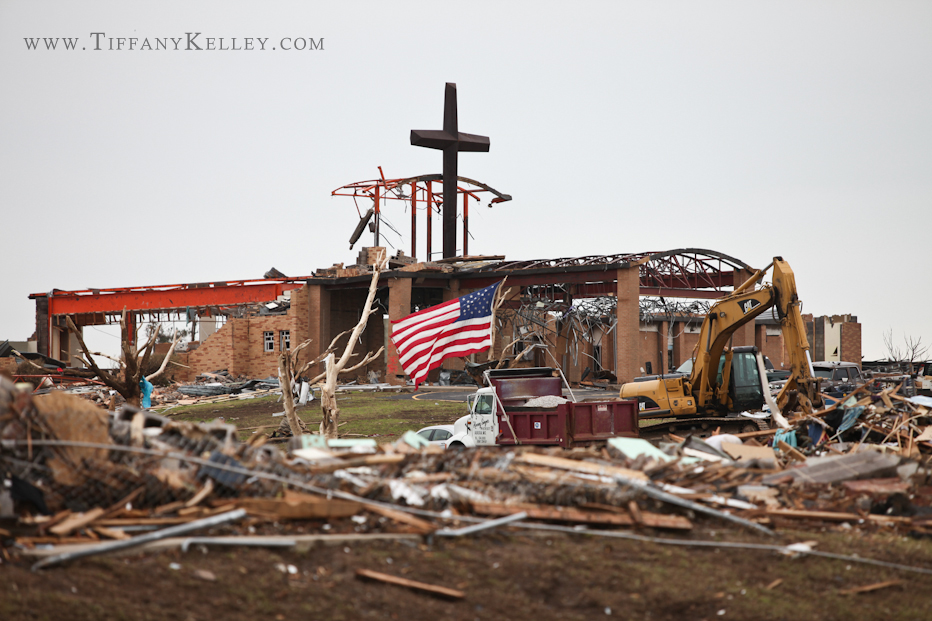 BELOW: Surveying the damage – Bill Driscoll, Jr. of All Hands, Donna Tente of CityTeam, and FEMA VAL’s Ken Curtin and Justin Bowen.

BELOW: A child’s toy and a makeshift street sign. Search and rescue teams used these spray-painted markers to help guide them through affected areas. 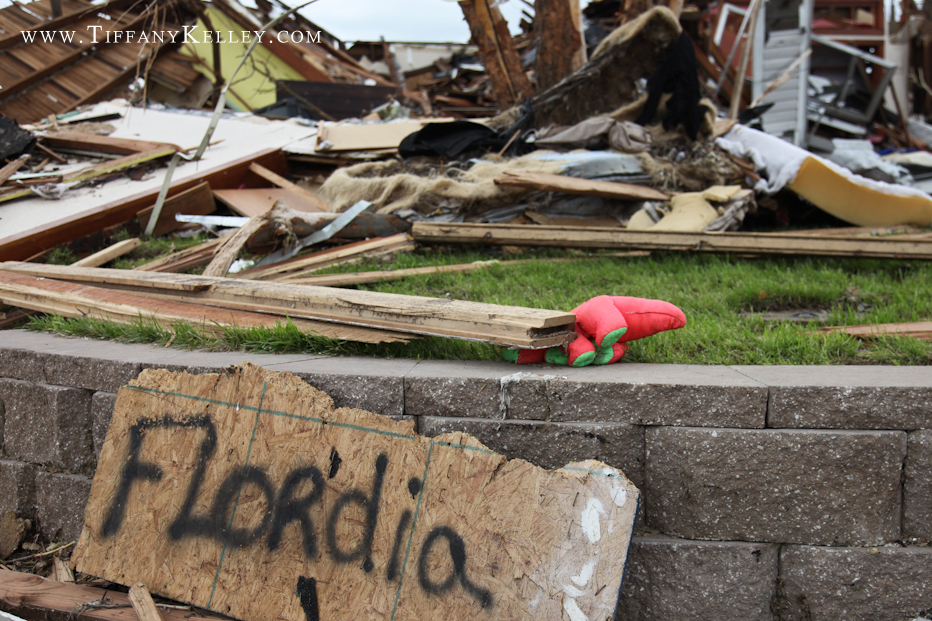 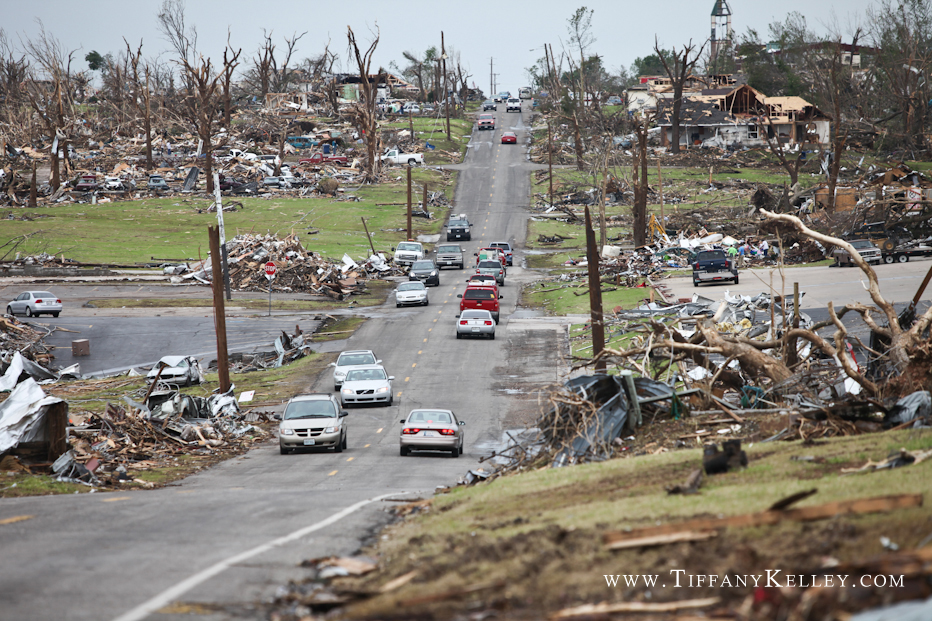 BELOW: Sheets of metal were blown about everywhere.  You find them wrapped around tree branches, over power lines, and elsewhere.

BELOW: A member of the media directed me to this car, which he described as having been “taco-ed” around a pole. 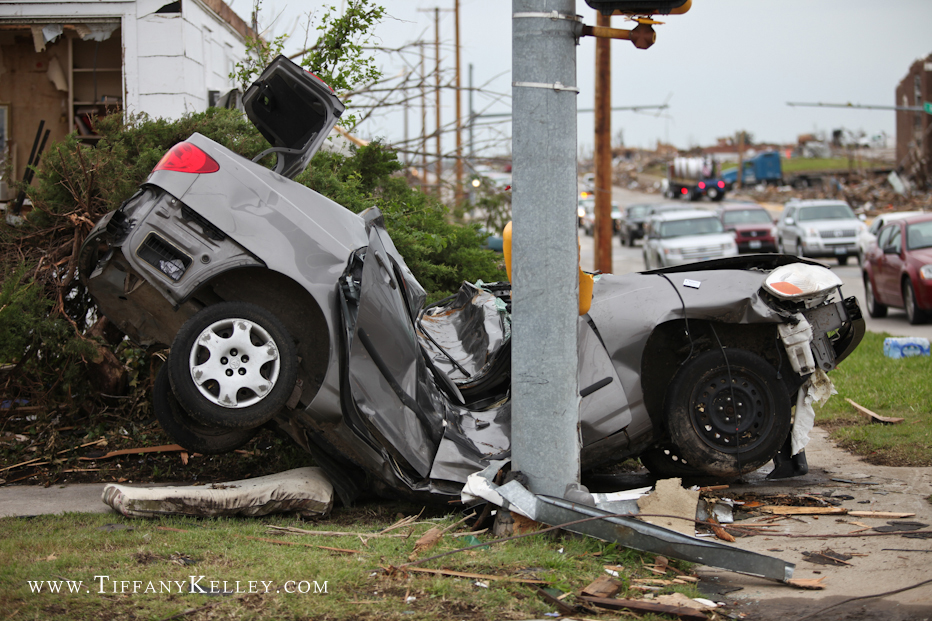 As you can see, being inside a vehicle is one of the most unsafe locations during a tornado. 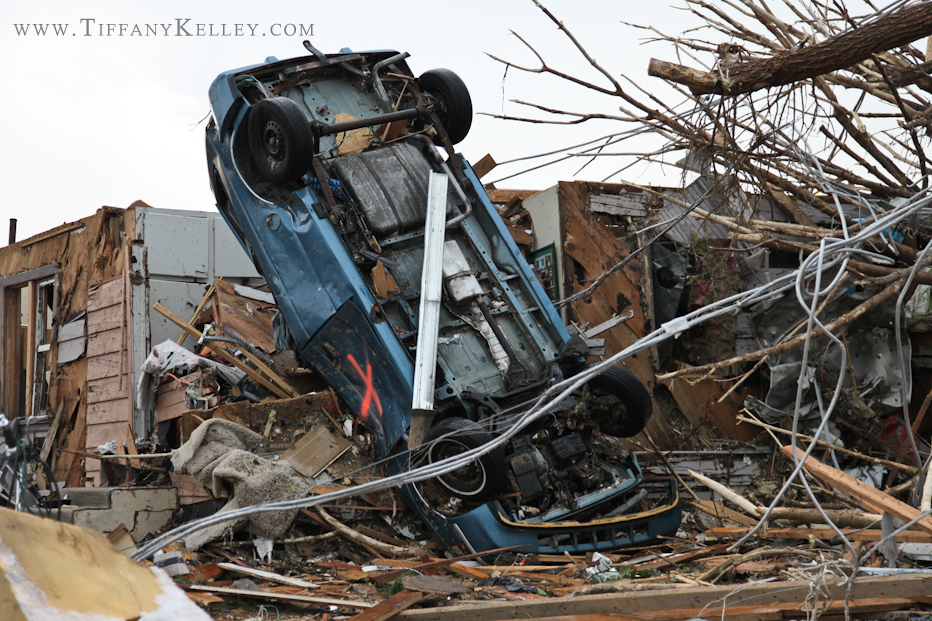 BELOW:  The three photos below are to serve as a reminder of the children affected by this tragedy, whose lives will never be the same. 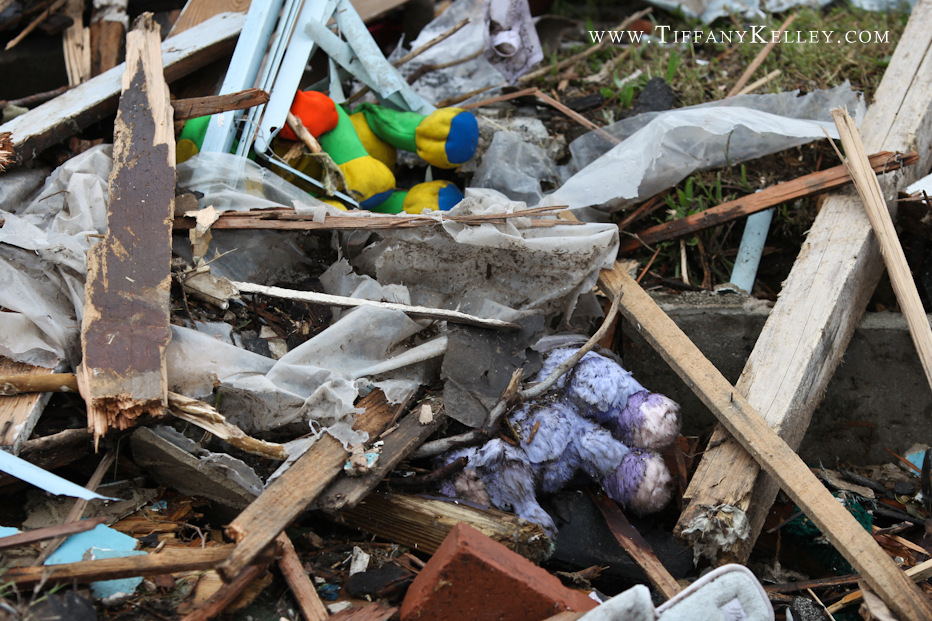 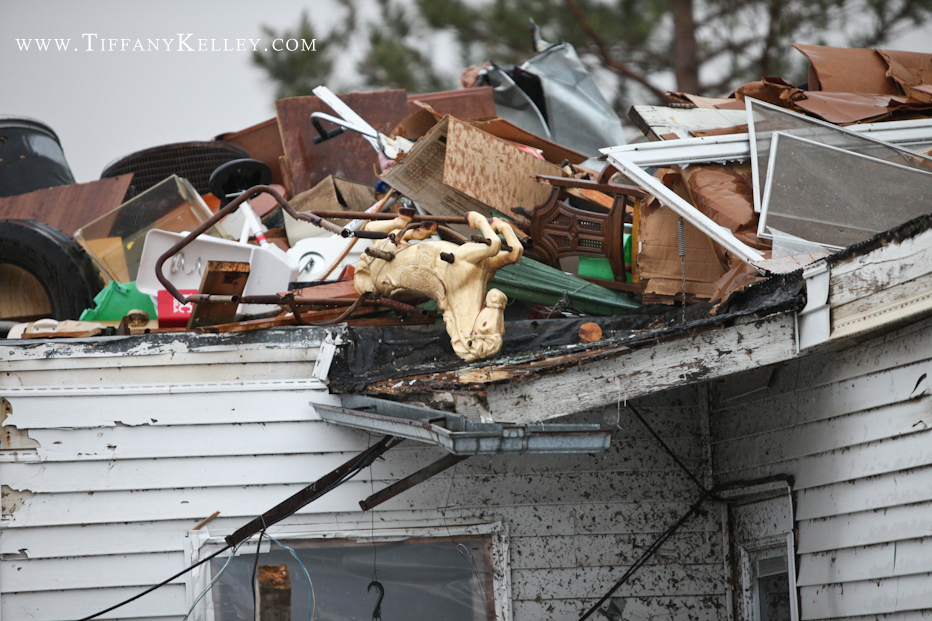 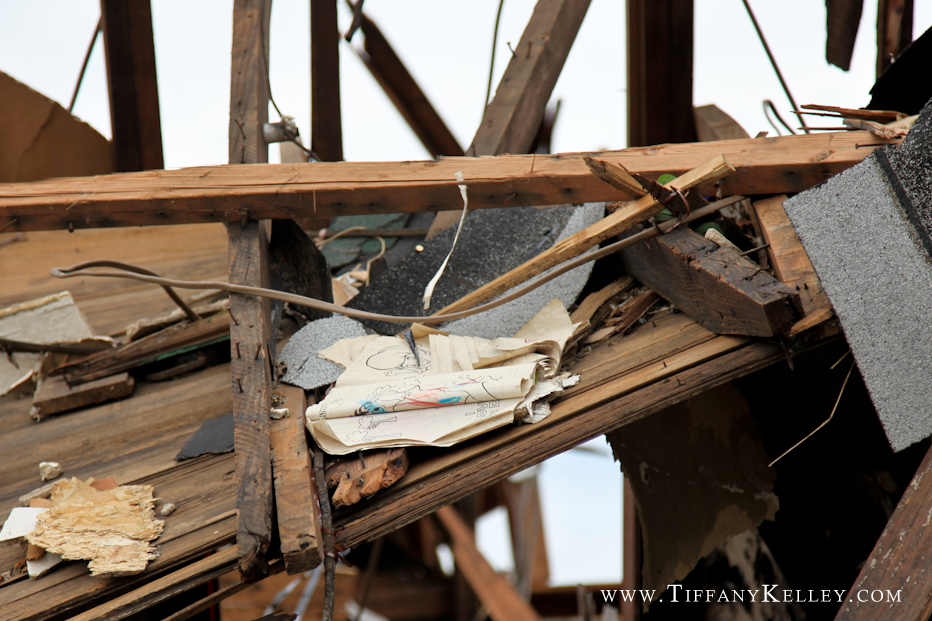 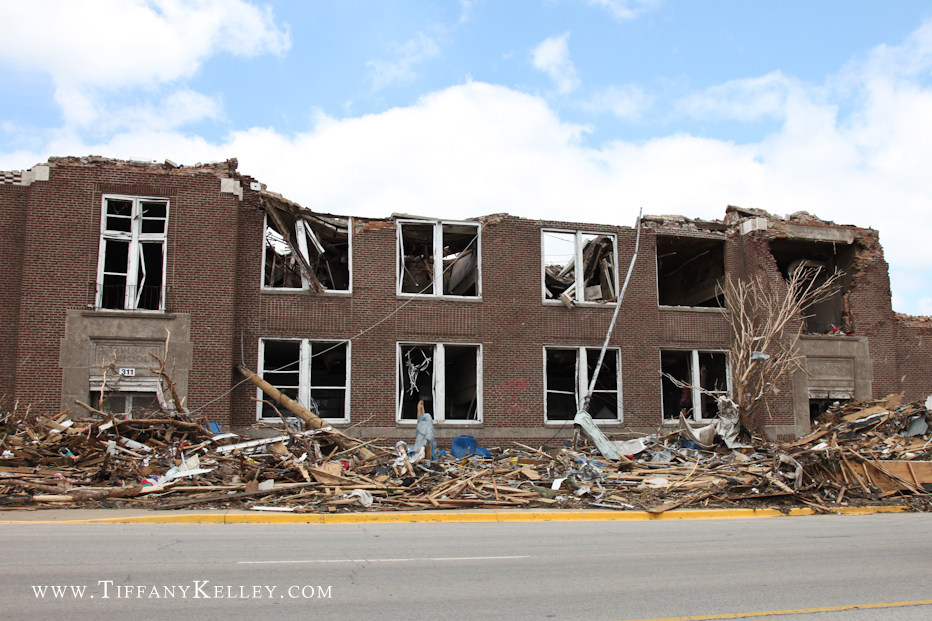 BELOW: K-9 Search and Rescue teams. 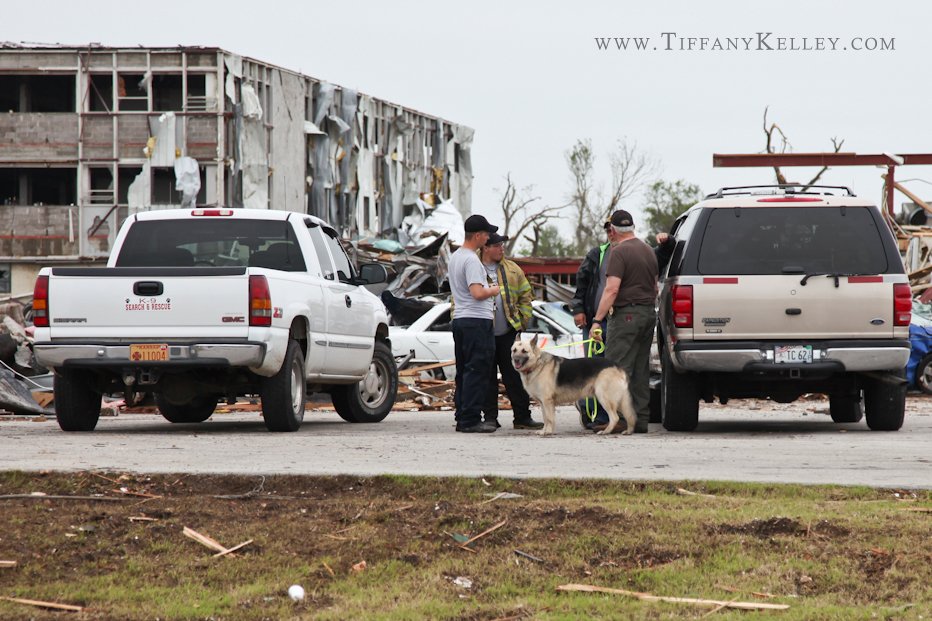 BELOW: American flags are seen flying throughout Joplin.  The resiliency I witnessed in this community is awe-inspiring. 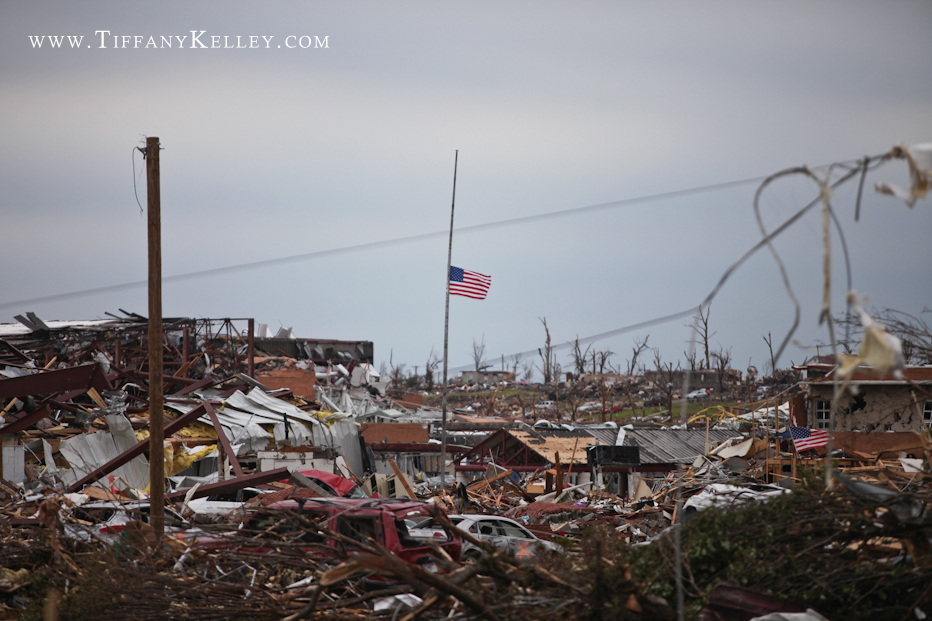 BELOW: National Guard was deployed to the area after the storm. 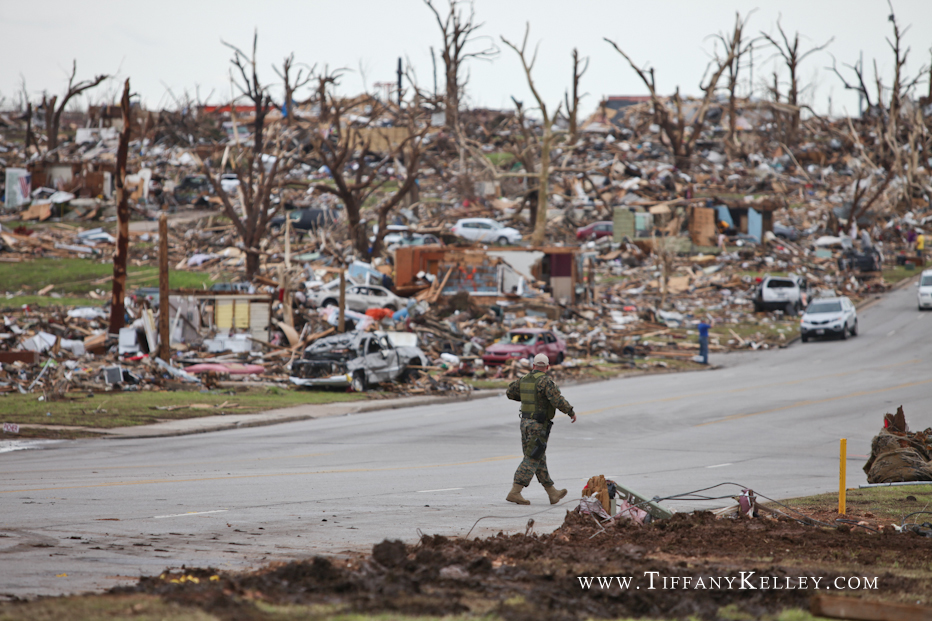 BELOW: A close-up of the damage to St. John’s Hospital.  All windows were blown out and debris scattered everywhere.  There were even reports of x-rays being found as far as 70 miles away.  Many of the cars in the parking lot were crumpled up like paper into little balls of metal and broken glass.

BELOW: Helicopters circle overhead.  Fallen trees everywhere.  Some were even stripped of their bark by the 200+ mph winds. 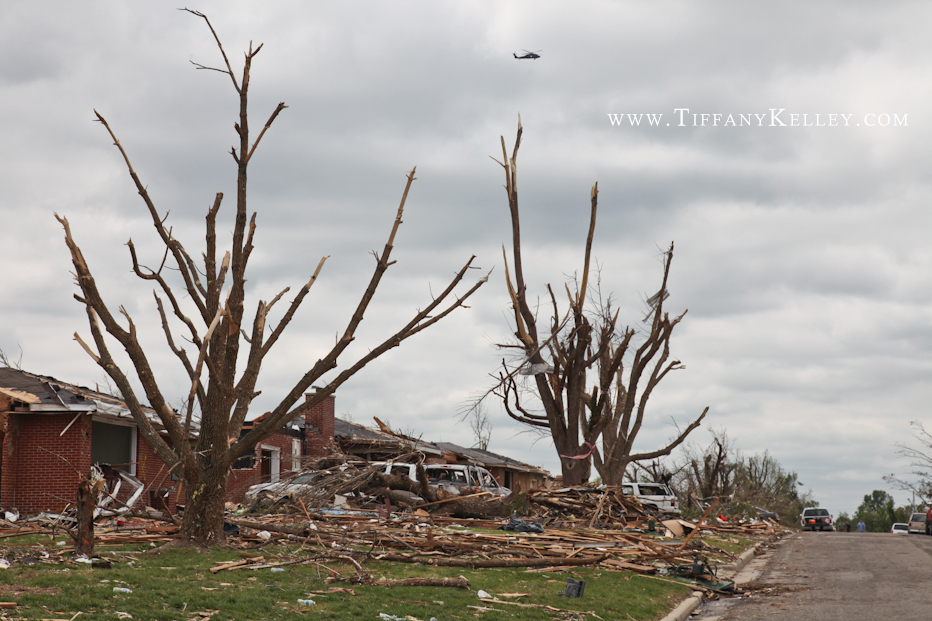 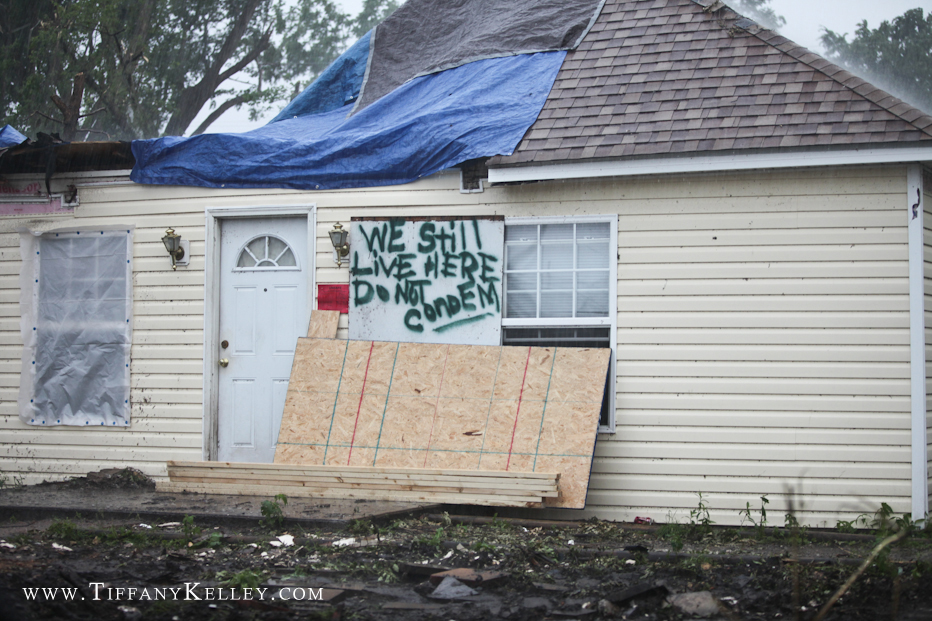 BELOW: The front steps leading up to a house no longer there.  All that remains is the foundation. 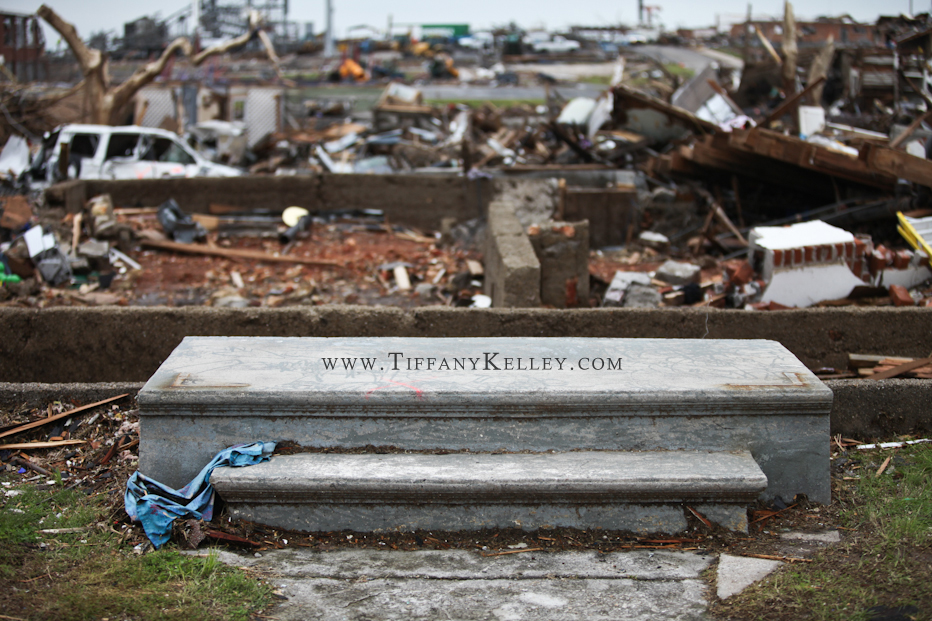 BELOW: An electrical substation hit hard by the tornado. Crews are working around the clock to restore power to residents. 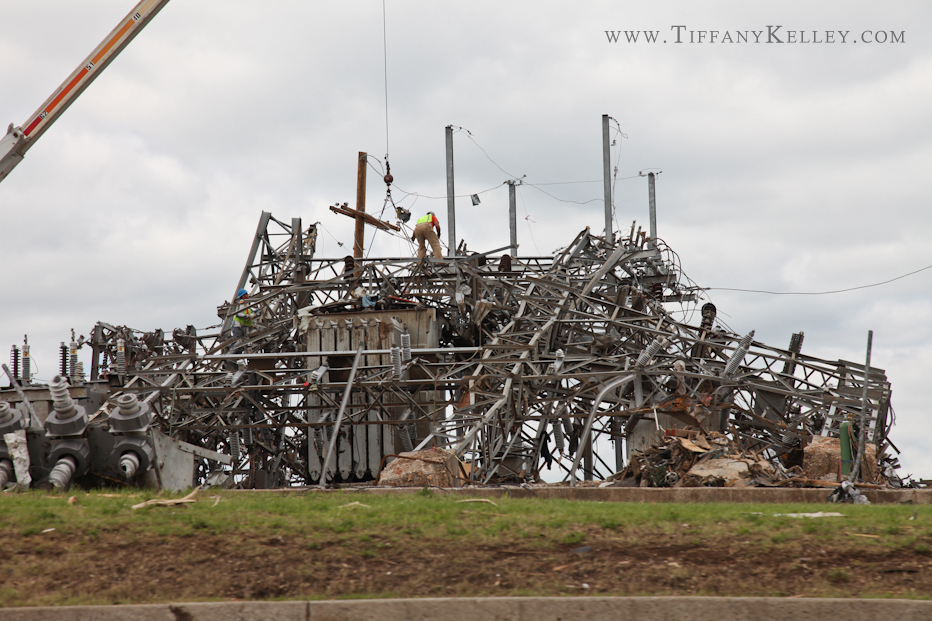 BELOW: Convoy of Hope out of Springfield, MO set up a distribution point delivering water and other goods to storm survivors. 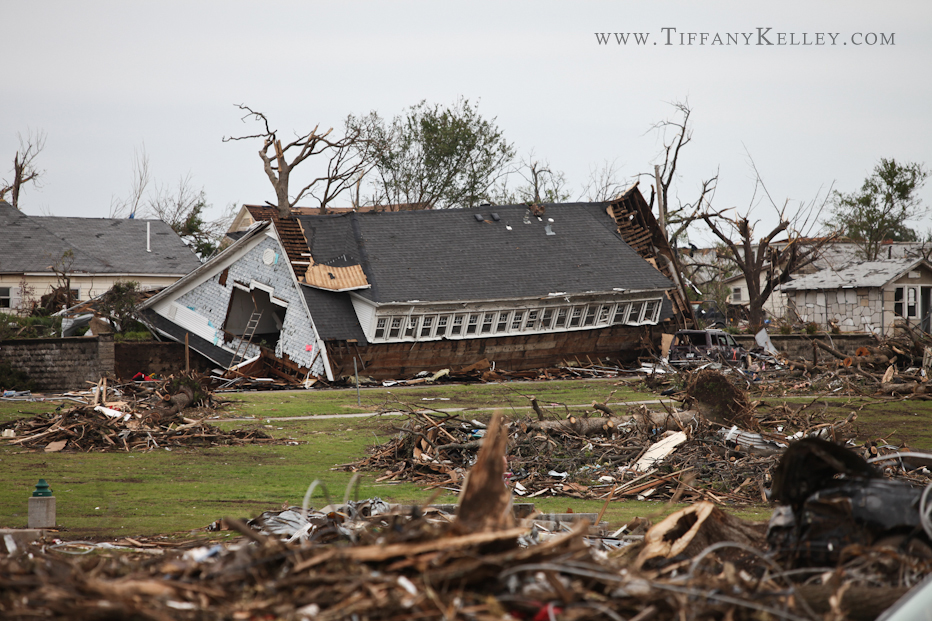 BELOW: A house badly damaged by the storm…missing a roof and windows, yet books still remain stacked on the shelves inside. 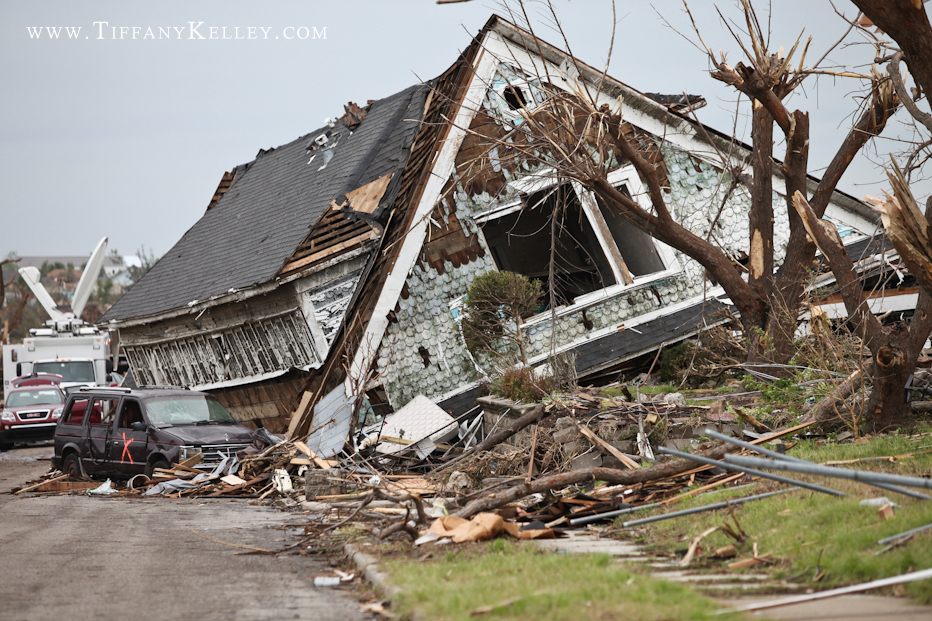 BELOW: Joplin has received a HUGE volunteer response.  Literally thousands of people have come to help in any way they can.

Additional photos can be viewed on my Facebook page by clicking here.